Longtime CPAMP faculty member Lloyd Gerson has been elected to the Royal Society of Canada. Congratulations Lloyd! The Royal Society now counts two CPAMP members among its fellows (the other one is Brad Inwood).

We are happy to report that the University of Toronto did well in the recent issue of the Philosophical Gourmet report, a reputational ranking of Philosophy Graduate Departments in the English-Speaking world. While the Department of Philosophy is ranked 15th overall (1st in Canada) we have been ranked especially high in ancient and medieval philosophy!

Nicholas Riegel, who defended his dissertation “Beauty, τò καλóν, and its relationship to the Good in the works of Plato” this Fall (supervisor: Lloyd Gerson), has won a three-year post-doctoral fellowship at the Department of Philosophy at the University of Brasilia, Brazil. Congratulations, Nicholas!!

Brian Dobell’s “Augustine’s Intellectual Conversion: The Journey from Platonism to Christianity” has come out with Cambridge University Press and Tom Angier’s “Techne in Aristotle’s Ethics: Crafting the Moral Life” was published by Continuum Press. Congratulations!! 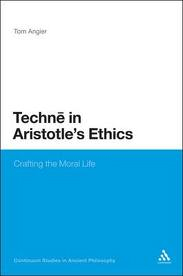 Fresh from the press: Brad Inwood’s translation of Seneca’s On Benefits (with M. Griffith). The volume is part of Chicago University Press’ Complete Works of Lucius Annaeus Seneca series. For more information go to here. “The Cambridge History of Philosophy in Late Antiquity comprises over forty specially commissioned essays by experts on the philosophy of the period 200–800 CE. Designed as a successor to The Cambridge History of Later Greek and Early Medieval Philosophy (ed. A. H. Armstrong), it takes into account some forty years of scholarship since the publication of that volume. The contributors examine philosophy as it entered literature, science and religion, and offer new and extensive assessments of philosophers who until recently have been mostly ignored. The volume also includes a complete digest of all philosophical works known to have been written during this period. It will be an invaluable resource for all those interested in this rich and still emerging field.”